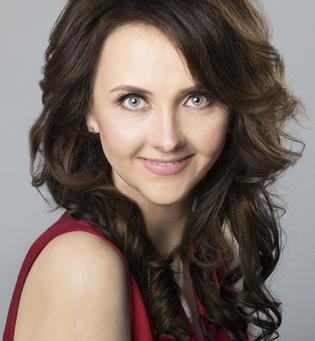 Karolina Ingleton is an artist gifted with a wide vocal range and genuine musicality. Her desire to sing brings her center-stage at concerts, festivals, charity fundraisers, musical theater performances and television programs.

Her performances not only showcase her powerful yet angelic voice which can easily stir a listener's soul but also present her as a dynamic lyricist and composer of original songs.
​
Karolina's 4 vocally expressive albums: Here I Am (English), My Christmas (English-Polish), Moment (English-Polish) and Subtly Revealed (English), established her as a recording artist of the Polish-Canadian community that embraced and supported her musical endeavors right from the humble beginnings.  Karolina's music achieved song-of-the-week and #1 hit status on local radio charts in Canada and Poland.  Her albums are the result of numerous collaborations, bridging talent from Europe and North America.

Born in Poland, Karolina grew up in Canada exposed to the diverse multicultural environment.  Her first solo performance took place at the tender age of 6 playing the role of Little Red Riding Hood in a school musical.  A few years later while travelling aboard a luxurious ocean liner, she was asked by the entertainment officer to sing at a talent show entitled Passengers For Passengers.  With just one performance, she became an instantly popular young entertainer.

Today she is a business professional performing at numerous concerts as a soloist or broadening her experiences by stepping into the role of an artistic director or an actress.  She is also a member of the female vocal trio Voysis, currently working on an All Canadian musical project.

Her motto in life is "Never Stop Learning" and aside from working in the entertainment industry she enjoys the role of being a mother to her beautiful daughter.